What is the Japanese Beetle?

On March 19, 2022, the Canadian Food Inspection Agency (CFIA) made several updates to its response to control the Japanese beetle (Popillia japonica). This invasive insect was introduced to North America from Japan in 1916, and can cause widespread damage to crops, turf grass, and garden plants. The CFIA expanded its soil movement regulated area from adjacent to False Creek to encompass central Vancouver, in addition to an area north of Burnaby Lake. 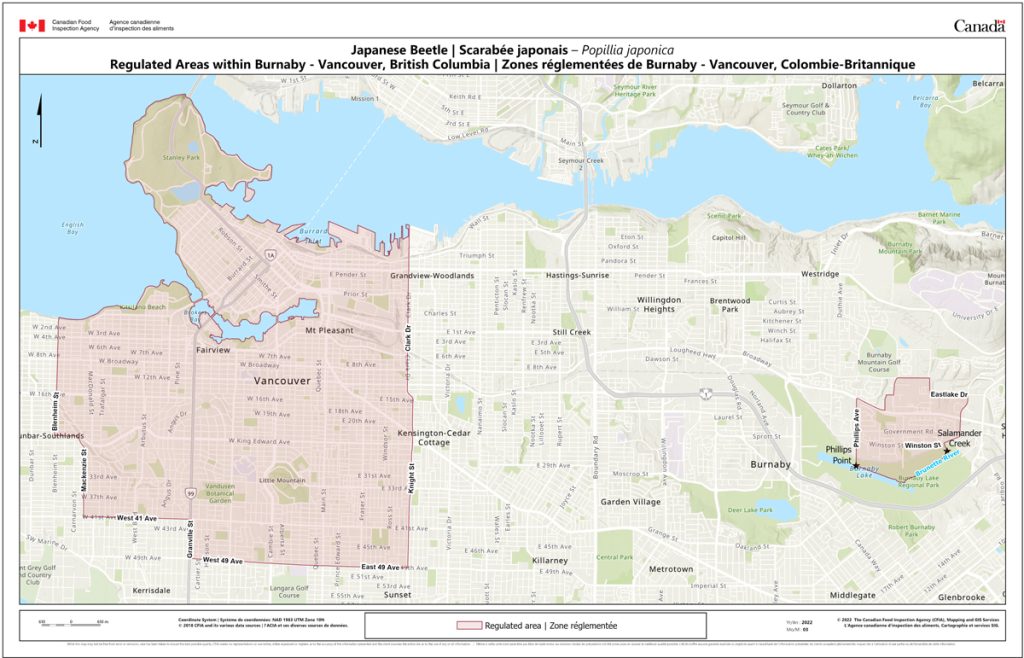 Understanding the Movement of Soil

Movement of soil, and plants with attached soil from these regulated areas, is prohibited year-round. Furthermore, movement of any plants and plant parts without soil (e.g., petals, cuttings, leaves) from these areas is also prohibited between June 15 and October 15, due to the emergence of mature Japanese beetles, which coincides with the adult flying season.

To obtain a movement certificate, an application must be submitted to CFIA. Applicants must describe the soil type to be relocated from the regulated area (e.g., top 30 cm of soil), the end use (disposal, treatment, planting), origin and destination addresses, and number of shipments. Submitted applications may take up to five business days to be reviewed and before a certificate is issued.

To report Japanese beetle or larvae sightings, email the CFIA with high-resolution photographs. When possible, try collecting as many Japanese beetles as possible and storing them in the freezer inside a sealed hard-sided container. You can also contact CFIA via phone at 604-292-5742 for further instructions.

How Can We Help?

Keystone Environmental can assist clients with identification of Japanese Beetle damage, soil movement applications and ensuring clients fulfill the requirements stipulated by CFIA during soil movement. For more information about how we can further help you, please contact Jeff Prowse, Project Coordinator.